Over the years, the lack of resources for veterans coming back from active duty has been a huge and growing issue. Men and women can come back from these positions with PTSD, physical injury or other emotional trauma.

One non-profit in the Downriver community is trying to help those very veterans.

Victory Gym and Veterans’ Health Club is a 501(c)(3) charity dedicated to helping those with PTSD take control of their lives again through physical activity, peer support and connection. 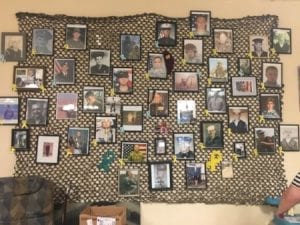 Executive Director Char Haener joked though that their tagline should be, “it’s not just a gym.”

That line is obvious if one walks into the building, as it’s connected to a banquet center where special events are held and members can rent out the space. Haener had her son’s graduation party there.

There’s also a community room where older members will come hang out in the morning, drink coffee and talk with people who have been in similar situations. In this room is also where a wall of dozens of military photos are placed, each with a different color ribbon. Blue is for the members who have PTSD, while yellow is for the ones who have been killed in action.

The gym began in December of 2015 and was started by Mike Emory, a veteran who spent 18 years in the military.

Haener said he was working out a local gym when he retired from the army, and it suddenly closed. Because of his PTSD, the lack of a consistent schedule threw him into a “tailspin.” He ended up in an in-patient facility in Fort Knox for about a month, which is where he thought up the idea of opening up a gym specifically for veterans.

“He felt good when he was with other people and doing fitness,” Haener said. “He enjoyed that camaraderie.”

Emory began the gym on Telegraph Road, and he started with basically nothing. All of the equipment was donated, and they eventually outgrew the building and ended up moving to their current location on King Road.

In the beginning, the gym was just for veterans, but Emory knew that first responders also knew what it was like to have PTSD, so they were included. Now anyone can join, whether you have a loved one who is a veteran, or you just want to live a healthier lifestyle. Veterans and first responders get a free membership, while civilians pay a monthly charge.

“We have a weekly PTSD meeting for veterans and first responders that’s every Wednesday at 7,” Haener said. “We also have a caregiver group that meets on Thursdays at 7.”

Mike Trout, the Chief Operations Officer at the gym and a 17-year Army Ranger, is one of the guys who heads up the Wednesday veteran meetings.

“We have our own private little group, and we reach out to each other,” Trout said. “We call it a buddy check.”

The meetings are completely confidential, and they are made up of people with a wide variety of ages, which can really make the group more diverse and helpful.

Everyone who works at the gym is a volunteer, and one would think that it would be hard for the charity to operate this way, but Trout and Haener both agree that the gym workers are like family. Trout joked that he basically lives there.

The volunteers might get even busier though, as it seems the gym has been rapidly growing in popularity. They currently have around 2,000 members but gained around 550 in the past few months.

The gym is thankful for the support from the community because it’s been so vital.

“We really can’t say enough about the local rotary clubs because without them we literally would not be open,” Haener said.

Because of contributions from places like the rotary, the gym has been able to get more equipment and add more amenities like a woodshop that will be opening up soon.

Victory Gym is a place that is not only needed in Downriver but everywhere. They continue to live up to their motto of helping veterans and doing whatever they can to promote fitness and wellness.

To learn more, go to https://www.victorygymvhc.org/.