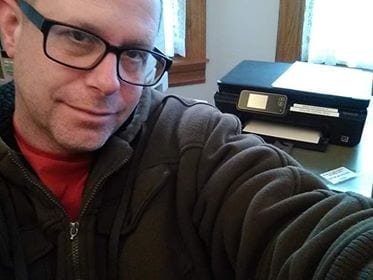 Kevin’s contributions are found on some of our history pages, and you can read more here.

Kevin Harrison is going to be our go-to guy for all Downriver history. Harrison is currently 48 years old and was born in Wyandotte. He was a Southgate resident for 30 years and overall Downriver resident for 38, but now lives in Detroit. He graduated from Southgate Aquinas High School in 1989 and was on the yearbook staff and school newspaper staff.

His career began as a composition assistant at the local paper, now defunct, Mellus Newspapers after high school. He then graduated in 1997 from Henry Ford College with a major in telecommunications/video production. He has 13 years of experience in television production, and he started doing historical research 25 years ago. He produced a public access history show for one season in 1995 and became actively involved in 2011 with the Downriver Things That Are Not There Anymore Facebook group, which led Harrison to start his own website in 2013.

Kevin’s contributions are found on some of our history pages, and you can read more here.

A link to Harrison’s website can be found here.