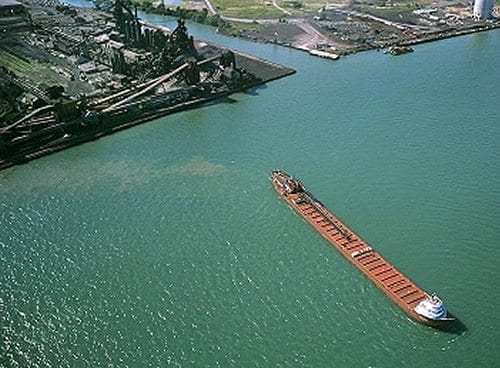 River Rouge was first a part of Ecorse Township and did not become a village until 1899. It then became a city on April 3, 1922.

River Rouge was first a part of Ecorse Township and did not become a village until 1899. It then became a city on April 3, 1922. The name River Rouge comes from the French word for Red River and was named by French Lt. Antoine de la Monthe Cadillac.

The River Rouge area used to be farmland but was quickly taken over by settlers who came by means of the “River Road” (or better known today as West Jefferson Avenue) or the “Dearborn Road.” The “River Road” is one of the oldest highways in Wayne County.

The location of River Rouge helped transform the community from agricultural to industrial because it was perfect for manufacturing as it sat between the iron ore of the Upper Peninsula and the coal mines in the Eastern United States. Because of the easily obtainable natural materials, River Rouge has been synonymous with the River Rouge Ford Plant that contributes greatly to the community to this day.

Now called the Ford Rouge Center, the factory is not only still producing, but it is also a historical landmark. You can tour the factory and learn about Henry Ford and how the factory came to be.

Today River Rouge is home to two public parks, Memorial Park and Belanger Park, and a public library. With miles of waterfront and terrific kid and senior programs, River Rouge is an accepting and vibrant community.

Information gathered from The City of River Rouge, The Henry Ford and the US Census.