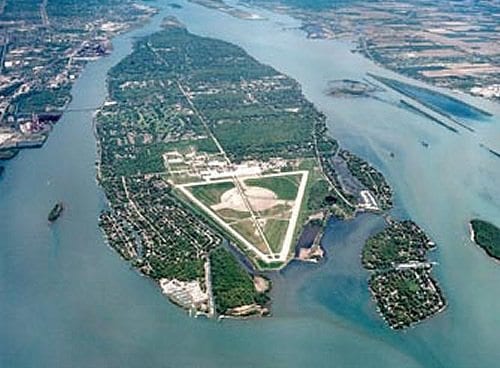 It is estimated that the Potawatomi tribe roamed Grosse Ile 1000 years before the arrival of European settlers. They named the island Kitcheminishen. 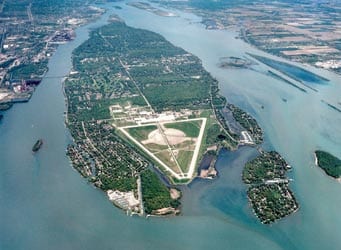 It is estimated that the Potawatomi tribe roamed Grosse Ile 1000 years before the arrival of European settlers. They named the island Kitcheminishen. French explorers visited the island in the late 1600s and and named it la grosse ile, meaning the big island. Antoine de la Mothe Cadillac spent the night of July 23, 1701 on the shore of the island before sailing on to found Detroit.  The British gained control of the area in 1763 with their victory in the French and Indian War. Throughout this time, the Potowatomi continued to consider the Island as part of their ancestral home. Tribal chiefs and elders deeded the land to William and Alexander Macomb two days after the adoption of the Declaration of Independence, July 6, 1776.

While many think of Grosse Ile as only one island, the township is actually made up of twelve islands. The area began to be developed in the 1800s when many summer homes were built along the shoreline. By the late 1800s, Grosse Ile had earned a reputation as the place to go for recreational boating. Sugar Island featured an amusement park, dance pavilion and bathing beach. The beauty of the water drew a number of prominent people. Ransom E. Olds, founder of the Olds Motor Vehicle Company, which would become Oldsmobile, had a magnificent estate built on Elba Island in 1916. John Kelsey, founder and president of Kelsey Wheel Company, purchased a summer home on the main island and organized the Grosse Ile Golf Club and Country Club. The list of famous and influential people with a connection to Grosse Ile continues on as a book of who’s who: Charles and William Fisher, William Knudsen, Henry Ford, Harry Bennett, John Karmazin, Sr., John Telnack, J. Robert “Bob” Beyster, and Heinz Prechter. 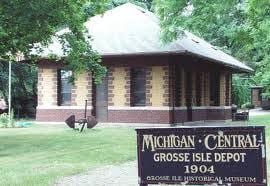 A small airport was built and operated on Grosse Ile starting in the 1920s. A flying school was operated by the Curtiss-Wright Flying Service. Starting in the late 1920s, the land was used by the Navy to construct seaplanes and dirigibles and in 1929, the U.S. Naval Air Station Grosse Ile opened. The world’s first all metal airship, the ZMC-2 was built for the Navy on the grounds. During World War II, the air station was one of the primary training stations for Naval and Royal Air Force pilots. Former President George H. W. Bush and game show host Bob Barker were trained on Grosse Ile. With the advent of jet fighters, the runways proved to be too short for training. In the 1950s, the army installed Nike Ajax surface to air missiles to defend Detroit against potential Soviet bombers. During the 1960s, the base was used to train Naval and Marine Reservists some of whom served in Vietnam. The base was closed in 1969. Almost immediately, the grounds were converted and became the Grosse Ile Municipal Airport where, on average, there are 24,000 takeoffs and landings per year.

A ground connection with the mainland was established in 1873 where trains would carry freight and passengers over to the island. Bridges were built over the Detroit River to Stony Island where a ferryboat awaited to carry the train cars to Ontario where they would be placed back on tracks to travel east. Later, train service was provided between Trenton and Grosse Ile via the Michigan Central Railroad. A small depot was built in 1904 and today that structure serves as the Grosse Ile Historical Museum. The Grosse Ile Bridge Company opened a toll bridge on the west side of the island in 1913. It wasn’t long before most people were using automobiles to reach Grosse Ile and rail travel ceased. In 1931, the rail bridge was converted to a roadway by Wayne County and is free to anyone who wants to use it. It is estimated that three-quarters of the traffic that travels to and from Grosse Ile use the free bridge. Because Grosse Ile has much to offer in the way of amenities, there has been an increase in residential development since the mid-1900s. At the same time, the unique character of the island and a healthy balance between open space and development has been preserved by the Township through its policies.