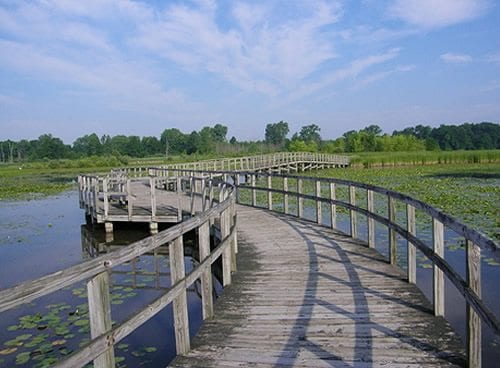 Settlement of the Sumpter area was slow at first because the area was very difficult to reach. Even if one did make it and setup a farm, it was equally difficult to transport goods by wagon considering the condition of the early roads, if they could even be called that. The earliest settlers to the Sumpter area began to arrive after the opening of the Erie Canal in 1825.

Settlement of the Sumpter area was slow at first because the area was very difficult to reach. Even if one did make it and setup a farm, it was equally difficult to transport goods by wagon considering the condition of the early roads, if they could even be called that. The earliest settlers to the Sumpter area began to arrive after the opening of the Erie Canal in 1825. The canal reduced a 5 to 10 day arduous land journey to a 44 hour water route.

Those first pioneers were from hearty stock and had names like Allen, Merrill, Coon, Aldridge and Brooks. The issues they had to contend with were considerable. There were trees that needed to be cut and cleared for farmland.  Mosquitoes could make life miserable during the day and at night. Food was provided by hunting or farming which was very labor intensive on the frontier especially. But these early settlers were not to be deterred from cutting out a life in this new country.

The Township of Sumpter was formed on April 6, 1840. Named after General Thomas Sumter who served in the American Revolution, the first township clerk misspelled his name by adding a “p” giving the area the label it has to this day. During the 19th century, the township was divided into two villages: West Sumpter and Martinsville. West Sumpter was where the main business district developed which included two stores, two churches, cooper, school, hotel, a Post Office and a creamery.  But Martinsville had a number of businesses that aided citizens as well including a wagon maker, blacksmith, cider mill, and a shoemaker. By the early 20th century, additional businesses had come to the area: an insurance company, mason, and a grocery store. The wagon manufacturing business, owned by James Randall, transitioned into selling automobiles by 1916.

The Township established its own school district in 1956. Student who attended Sumpter Elementary would continue on to Bessie Hoffman Junior High. Facing financial difficulties, the district had to be discontinued in 1967. The State of Michigan proceeded to divide Sumpter Township into four school districts. The original Sumpter Elementary School is now used for a police station, senior center, head start school, and a community center.

Because of its more remote location in reference to the Metro Detroit area, the township’s population has grown slowly. Oil was discovered in the area in 1941. A pump mechanism was installed by the Sumpter Oil and Gas Company and at one point, the company was shipping 100 barrels a day. It was reported to be a very high grade oil and the first producing well in Wayne County.

Today, Sumpter Township is made up of a diverse population. The residents and visitors alike have much to enjoy in terms of natural beauty including woodlands, wetlands, and prairies. A major source of pride for the community is the Crosswinds Marsh Preserve, one of the largest man-made wetlands in the country. The preserve covers 900 acres and is managed by the Wayne County Parks Department. There is so much to enjoy at Crosswinds Marsh: hiking, canoeing, bird watching, fishing, horseback riding or just a leisurely stroll to enjoy the beautiful natural setting.

In many ways, Sumpter Township has held onto its rural roots throughout its history. It has grown to be a community of just over 9,500 residents in an area of 37.5 square miles. There is plenty of room to spread out and enjoy a more laid back style of living. And the residents enjoy every minute of it.

Written by Craig Hutchinson, historical staff writer for Discover Downriver.  See more about Craig here . Craig is available for hire as a creative writer at craig@discoverdownriver.com.